Dr Gem Elizabeth George-Tharakan, completed her undergraduate training in Medicine at UNITRA, current WSU, Eastern Cape. She fulfilled her internship in the Western Cape, at 2 Military Hospital. She thereafter returned to the Eastern Cape where she did her community service and worked as a medical officer. It was during that time that she developed a passion for Haematology. She relocated to Pretoria where she completed her postgraduate training in Haematopathology at the University of Pretoria, she worked and lectured as a specialist consultant for two years after which she relocated again to super specialize as a Clinical Haematologist at Tygerberg Hospital, Capetown. She currently works at Pretoria East Hospital and Witbank, while based at Middelburg, Mpumalanga.

Dr George-Tharakan has an interest in both benign and malignant haematological disorders, treating patients encompassing this spectrum with the newest and most affordable therapies available in the market. She has also been a member of MASAC, the South African Haemophilia Fund (SAHF), the South African Society of Haematologists (SASH) and the European Society of Clinical Cell Analysis (ESCCA).

In her spare time she enjoys spending time with her family, reading, writing, cooking, and travelling. 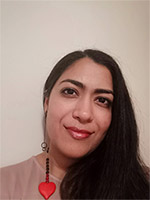